Even after practicing yoga for over 10 years, Myda never thought she’d end up a teacher. She began to consider it as a path when she was studyingacupuncture. Observing patients in her first year, she realized how disconnected people felt from their own bodies and disempowered in their own healing. After constantly recommending patients to yoga, she decided to leave acupunctureand devote herself to teaching.Myda received her first 200-hour training in 2009 at the Nosara Yoga Institute in Vinyasa. In 2010, wanting to incorporate more alignment-based practices into her teaching, she completed her second 200 hours in Anusara Yoga with Tara Glazier at Abhaya Yoga in Brooklyn.  She has advanced her training in therapeutics with Martin Kirk and workshopswith John Friend, and continues to study with Elena Brower and Ally Bogard.  More recently she has completed a 100 hour mindfulness and meditation teacher training with the Nalanda Institute and just this past July, after returning to Abhaya Yoga to study once again with Tara, received her 500 hour Advanced Teacher Training Certification.  Forever a student, Myda is greatly indebted to the practice of yoga and all of its amazing teachers. She is continually thankful for all she has been given andhas learned and hopes that she can share it with those who will join her in the path of growth, laughter, life and love.

Bolster your work from home practice with our live and on-demand video content options from Abhaya Yoga's fearless teachers. 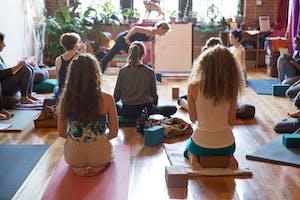 A deep experience of the Subtle or Inner Practices of Yoga. Join our 200 & 300 Hour Yoga Teacher Training in Brooklyn. Refined over 10+...