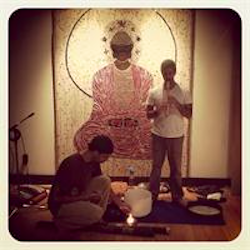 Sound Healing Meditation with Rest of the River.......

Come immerse yourself in sounds to accent silence and deepen meditation. With instruments from around the world including Chinese guzheng, Native American flutes, hammer dulcimer, frame drum, and other forms of percussion, Rest of the River creates a blanket of meditative sound which allows you to go deeper into yourself and to move closer to the witness inside. By allowing the sounds to remove the excess baggage blocking our chakras, we can see things as they are and move towards the eternal. An array of crystal and Tibetan singing bowls will also be used to add to the sound meditation. It is full of good intentions. It is full of peace.

The members of Rest of the River, Jerome and Michael Burdi, are Brooklyn born and bred musicians who developed a taste for world music as teenagers. Michael found his voice through playing an array of string instruments and Jerome through percussion. The brothers traveled together to Brazil to experience shamanic ceremonies and through parts of India, where they heard different styles of music and were greatly influenced. They are of Lebanese heritage and have also been deeply inspired by Middle Eastern rhythms. They perform together in yoga studios and music venues and are also recording a sound meditation album.

Check out their webpage http://restoftheriver.com/fr_home.cfm

Chakra Balancing Sound Medicine will be offered once a month focusing on a different subject area each time. During the first half of the...

Journey to the Heart: Guided...

You are invited to raise your vibration, lighten your heart and release what isn’t serving you. This is a monthly event, an opportunity to...

Move peacefully into the New Year. Through asana, sound healing, meditation and intention setting we will release what no longer serves us,...