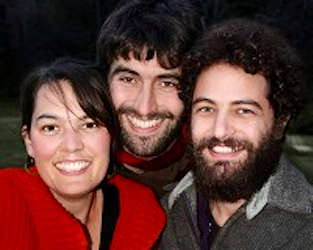 Sign Up
The Starry Mountain Trio (Avery Book, Gideon Crevoshay and Suzannah Park) was recently born from the critically acclaimed nine voice ensemble, The Starry Mountain Singers. The trio specializes in four traditional vocal genres: polyphonic singing from Corsica and from the Republic of Georgia, ballads from the British Isles and Appalachia, and shape-note music. The three met in the late '90s as teenagers while singing and touring with Vermont-based Village Harmony, and in subsequent tours with the group's professional touring ensemble, Northern Harmony. They are lifelong musicians with a deep love of studying, teaching, and performing traditional vocal styles. Each member of the trio has contributed songs from her or his particular area of musical knowledge and expertise, resulting in a dynamic and eclectic program that will delight traditional music fans.5 General Admission/2 Students, Seniors & Artists
Also of Interest

Please come and join the Starry Mountain Singers for a warming concert in a wintery month. The songs come from various vocal traditions...

Vocal traditions from around the world

Join the Starry Mountain Singers for a delicious, high energy, powerful singing workshop. Drawing from a dynamic repertoire of Appalachian,...

We will practice Qigong selected from Shamanic, Traditional, Medical and Contemporary sets—to give you a taste of these different...